These cinnamon french toast sticks are coated with cinnamon and sugar then baked until golden and crisp for an epic, dippable, breakfast.

This recipe takes classic french toast to an entirely new level, and it’s baked on a sheet pan for an easier, less messy breakfast you can whip up quick.

If your kids adore those french toast sticks from the grocery store, then they’re going to love this homemade version you can make at home with real ingredients like bread, milk, eggs, vanilla, cinnamon, and sugar.

They’re warm on the inside and crispy on the outside for an epic breakfast you can pick up and eat!

Here’s a list of everything you’ll need to make these cinnamon french toast sticks:

How to Make French Toast Sticks in the Oven

French toast in the oven? Yes, it’s not quite the same as classic french toast made on the stove-top but no less delicious. Here’s what to do:

To make sure these french toast sticks are crispy, don’t soak the slices in the egg mixture too long, about 30 seconds per side, and space them out onto the baking sheet. Crowding the slices too closely together will cause them to steam and turn out soggy.

French toast sticks are made for dunking into syrup and below, I’ve included a few of my favorite homemade syrups for pancakes, waffles, and recipes like this:

You can also freeze this recipe for when you’re in a pinch. It really is just like the storebought option but so much tastier and better for you! Homemade cinnamon french toast sticks coated with cinnamon and sugar, then baked until golden and crisp. 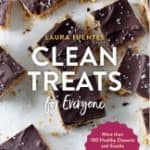 Hi, I'm Laura! I help you eliminate processed foods and added sugar from your family's diet with organized meal plans or a 30-day reset.